And Then the Town Took Off 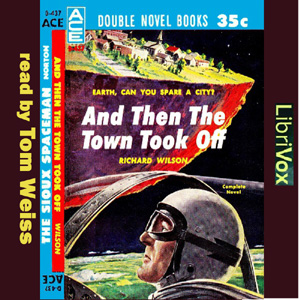 And Then the Town Took Off

LibriVox recording of And Then the Town Took Off, by Richard Wilson.
Read by Tom Weiss

The town of Superior, Ohio, certainly was living up to its name! In what was undoubtedly the most spectacular feat of the century, it simply picked itself up one night and rose two full miles above Earth! Radio messages stated simply that Superior had seceded from Earth. But Don Cort, stranded on that rising town, was beginning to suspect that nothing was simple about Superior except its citizens. Calmly they accepted their rise in the world as being due to one of their local townspeople, a crackpot professor. But after a couple of weeks of floating around, it began to be obvious that the professor had no idea how to get them down. So then it was up to Cort: either find a way to anchor Superior, or spend the rest of his days on the smallest—and the nuttiest—planet in the galaxy! (Summary From The Book)

Reviewer: ndmet - favoritefavoritefavorite - November 5, 2015
Subject: Great start, so-so conclusion
The reading by Tom Weiss is excellent, and I will search for more stories that he has done. The story has a great beginning. An entire town in Ohio lifts off the ground and hovers above the earth. The subsequent behavior by the trapped citizens of the town is interesting. But the creativity of the beginning of the story is not matched by the conclusion, and left me somewhat disappointed. Still, it's good old fashioned sci-fi and worth a listen.

Uploaded by librivoxbooks on May 3, 2013